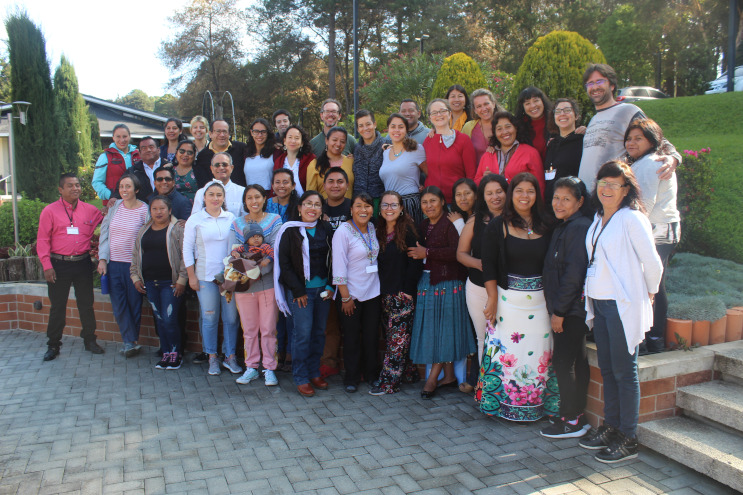 “People acquire knowledge by expressing their views and their own way of seeing the world. That is where history and culture begin.”

Paulo Freire, Pedagogy of the Oppressed

ATD’s Merging Knowledge creates a dynamic that promotes effective dialogue between academics, other professionals, and people living in situations of extreme poverty. By sharing their knowledge and experiences, these groups arrive at a more comprehensive understanding of poverty by “merging” three different types of expertise. Established in Europe, the Merging Knowledge process varies a bit by country, depending on the cultural context.

In 2020, 30 participants from Bolivia, Colombia, Spain, Guatemala, Mexico, and Peru began the “Merging Knowledge from Latin America” program. The students included eight academics, 10 professionals, and 12 people with experience of poverty. Two years later, they are ready to implement local Merging Knowledge projects in their own region.

So, why are we sharing know-how?

People who live in abject poverty are often treated as if they are ignorant and weak, constantly making them feel humiliated. In addition, others often belittle what people in poverty think or how they analyze their own experiences. Things they do just to survive are subject to criticism as well. These dismissive attitudes undermine people’s dignity and keep them from moving forward in life.

In this setting, the Cruce de Saberes has become a way of redefining the place of those in poverty in a shared knowledge context. It brings to life the possibility of an unlikely – but essential – dialogue so that the lives of families and communities living in extreme poverty can change.

Silvia Perez, from Spain, has experienced poverty and is taking part in the Latin America program.

If people living in extreme poverty are systematically excluded from public debate, how can we eradicate poverty? ATD Fourth World’s founder, Joseph Wresinski, strove to break down these barriers, developing a focus on co-creating knowledge.

Throughout its history, ATD Fourth World has created several different dynamics of knowledge exchange, all based on the belief in a fundamental and radical symmetry among diverse skills and experiences. These collaborative efforts to understand poverty better were always grounded in a deep respect for what people in disadvantaged communities know from experience.

Among these initiatives, the Fourth World People’s University (FWPU) plays a key role. These meetings are designed to be places for the collective expression and recognition of the knowledge possessed by people living in extreme poverty. By participating in FWPUs, many also become aware that they share a common history of suffering, oppression, and resistance. In different countries and cultures around the world today, FWPU’s enable people living in poverty to speak out and get involved in activism.

In the late 1990s, ATD Volunteer Corps members, supporters, and academics from several European countries began to develop the Merging Knowledge process, including these Guidelines. What they created was not just a participatory research-action methodology. Rather it is a way to integrate different kinds of expertise, from academic knowledge to lived experience. The goal is to build a common understanding among participants as well as a body of shared knowledge.

From common understanding to shared knowledge

So Knowledge Merging promotes the progressive building of collective know-how, while recognizing that the knowledge of people in deep poverty has got to be central to the process. Kassandra Villca from Bolivia, a program participant who has lived in poverty, explained that the program helped her value her own perspective and experiences.

“I’m finding that the course is transforming my lack of belief in myself. I’m more confident. I can see that with what I’m learning, I can teach others now too. I have to practice, but I know I will get there in the end. Professionally, the Diploma is making me want to focus on social careers so I can help people who need assistance. It’s totally helping me to identify and see my own views again–my ideas, my knowledge. Now I know I’m a person with a lot to give and a lot to learn, just like everybody else.”

The innovative education program builds on two international participatory action research projects that both used the Knowledge Merging process. The first, Extreme Poverty is Violence – Breaking the Silence – Searching for Peace, took place from 2009-2012. Then, from 2017-2019, ATD conducted The Hidden Dimensions of Poverty research project.

Over two years of studying on an equal footing, participants learned and experienced for themselves the benefits of using the Merging Knowledge process. Its principles and methodological tools have strengthened the different kinds of work each student does to overcome poverty whether they are individuals living in poverty, professionals working at social organizations, or academics.

Charo Carrasco, a participant from Peru in the professionals group, learned more about power dynamics at play in his work:

A rigorous program of study

The program itself has been developed around the three main stages of the Merging Knowledge process:

While the program emphasizes radical recognition of what each participant brings to the table, it remains rigorous. Enriched by Latin America’s own theory and research, it includes ideas from Brazilian Paulo Freire’s Pedagogy of the Oppressed and Columbian researcher Orlando Fals Borda’s The Sentient Being.

During their studies, participants were organized into local groups. These groups each designed a Merging Knowledge process to produce real change in their locality. After the training ended, each project would be led by graduates of the program and involve other people over several months.

A variety of rewarding results have come out of the Merging Knowledge Diploma from Latin America. The program has inspired participants to develop their own projects and these have led to other new initiatives. This contagious energy of activism embodies the true spirt of Merging Knowledge. ATD will continue to support these initiatives. And lessons learned from them will feed into ATD’s fundamental goal: always to be learning from those who experience extreme poverty around the world.