Miguel Ángel Estrella: Committed to Sharing Music with Everyone 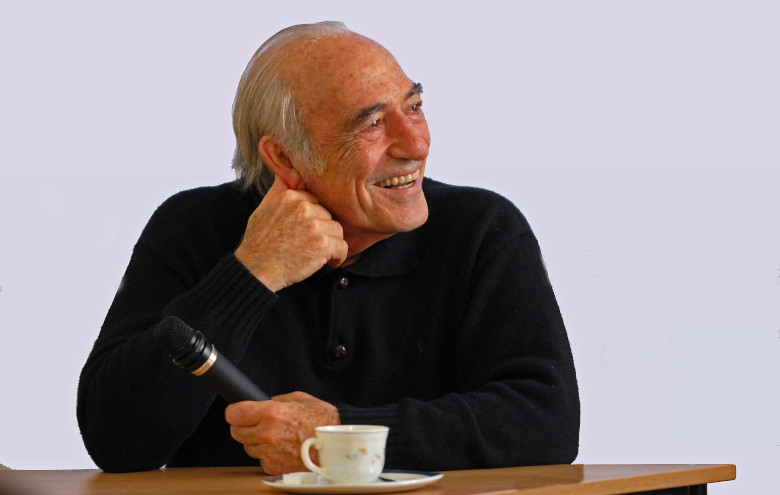 In 1988, Miguel Ángel Estrella (1940-2022), renowned Argentinian pianist and great friend of people in extreme poverty, gave an open-air concert in an underprivileged Paris neighbourhood. The residents, some even watching from their windows, were profoundly moved.

Below, excerpt from Miguel Ángel Estrella’s open-air concert in an underprivileged Paris neighbourhood.

After this concert, a deep and lasting respect developed between ATD Fourth World members and Estrella, whom Nadia Boulanger described as, above all, a poet. For several years, Miguel served as a member of the International Committee for October 17, the World Day for Overcoming Poverty. In today’s struggle for human rights, he considered ATD Fourth World’s members as sisters and brothers.

Estrella’s natural ability for sharing contributed to his close relationship with ATD Fourth World. Miguel never held back, always offering his best to people in the most deprived circumstances. He would often talk about his musical experiences in disadvantaged neighbourhoods where he played with his wife, Martha. Then he would explain what a certain person there had taught him about music and life.

In 1989, a delegation of ATD Fourth World members met with Estrella in Cotonou, Benin. At the time, Benin was experiencing a social, economic, and political crisis. At a civil society conference on peaceful solutions to these crises, Estrella joined ATD members during the working groups. His support ensured that others listened to the voices of those in extreme poverty.

Some time later, Estrella visited ATD Fourth World’s International Centre near Paris. There he wanted to meditate where ATD’s founder, Joseph Wresinski, was buried. Kneeling down, he kissed Wresinski’s tomb, saying, “We are all his children.”

Miguel liked to recount what his grandmother once told him:

“Miguel, you have received the gift of music. If you want to honour this gift, share it with those who are deprived of music.”

At the end of the 1970s, during the dictatorship in his native Argentina, Miguel was arrested in Uruguay and tortured by the military junta. He joined the thousands of Latin American citizens known as “Los desaparecidos” (“the disappeared”). As renowned artists mobilized to save his life, music played an essential role in Miguel’s survival, giving him strength during the worst of his suffering.

Upon his release, Miguel was invited to play in major concert halls from New York to Paris. But following his grandmother’s advice, Estrella played concerts in prisons. And he founded “Musique Espérance” [Music of Hope] to bring music into impoverished communities around the world. However, not everyone appreciated his activism and some judged his performances harshly. Others tried to humiliate him, implying that he avoided large venues with regular audiences in order to avert criticism of his music.

A partnership between Musique Espérance and ATD Fourth World lead to the creation of well received Music Schools. In Peru, Bolivia, Canada, and France, Miguel joined ATD members to play for people in extreme poverty, often right in their own neighbourhood.

In the summer of 2001, he visited families in a Travellers community near Paris. 1 Under a tent encircled by the families’ trailers, Miguel played a magnificent concert grand piano. After the performance, he visited each trailer where families welcomed him warmly. And when he gave a concert that evening in the village hall, the Traveller children and their families were right in the front row.

Another time in Noisy-le-Grand, France (where ATD was founded), Miguel performed on a grand piano surrounded by a crowd of people. With no introduction, he sat down and began to play Mozart, Beethoven, and Bach without mentioning the composers’ names. Then he asked, “Is there any music you particularly enjoy that you would like me to play?” Someone responded, “Yes, the second piece!”

Everyone listened intently. As soon as Miguel stoped, someone asked him to keep going. Little by little, he began to talk about the composers. Then he asked, “Does anyone here play an instrument?” A man went to get his accordion and began to play. Then another man got up and started to dance. “I always wanted to be a dancer!” he told Miguel as they hugged each other.

This was typical of Miguel, a very human interaction with everyone sharing the best they had. Miguel Ángel Estrella was a great pianist who chose to be on the side of those in extreme poverty. He always pushed for music to be accessible to everyone, writing once in a Fourth World magazine,

“Every person needs beauty in their life in order to share fully their humanity.”