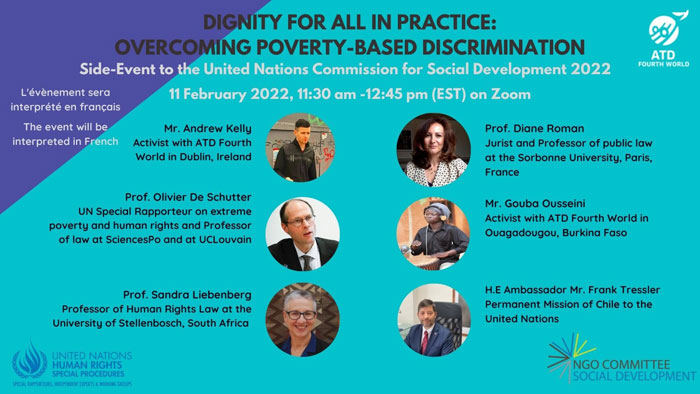 Side-event: Dignity for all in practice: overcoming poverty-based discrimination

Open to the public, register here.

Poverty is not about income alone. Recent international participatory research from ATD Fourth World and the University of Oxford shows that discrimination is part of the daily experience of people in poverty.

Speakers at this side event include Activists with a lived experience of poverty from Burkina Faso and Ireland, and academics working on poverty-based discrimination. In addition, academics and Member State representatives will discuss solutions that include laws prohibiting discrimination based on social status.

The side-event will address the following questions:

The event is Co-organized with Special Rapporteur on extreme poverty and human rights Olivier de Schutter and the NGO Committee on Social Development.

ATD paper, “Discrimination on the basis of socio-economic status”

“Does it only happen to me” on discrimination in Ireland

Watch “Don’t say where you are from”, a new video on poverty-based discrimination in Europe