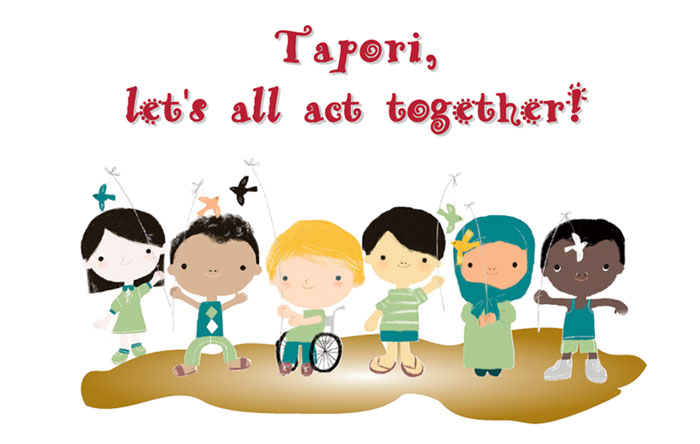 In connection with the 30th anniversary of the International Convention on the Rights of the Child, the international Tapori team is planning to launch a campaign called Acting Together. The idea is for children to think about their rights and take part in activities related to those rights.

Every year Tapori campaigns to involve children in commemorating October 17, the World Day to Overcome Extreme Poverty created at the urging of ATD Fourth World. This year, Tapori will emphasize both October 17 and the rights of the child. Recognized by the United Nations in 1992, World Day to Overcome Extreme Poverty is a day when people experiencing poverty and their allies can take a stand and make their voices heard. “Acting together to give children, their families, and society the means to put an end to poverty” is this year’s official theme.

What is special about this year’s campaign is that it is offering children the opportunity to take action. For example, they will develop a project related to their rights to be implemented in their community, then they will suggest it to local government.

The Acting Together campaign is first and foremost an opportunity to travel by reading stories about children’s struggles for their rights. Tapori draws on what the youngest among us have to say and what they dream about. Often it is friendship, love, sharing, education, and not leaving anyone behind.

“In our neighbourhood there are a lot of kids who don’t go to school. It’s not good for their future. They are going to become criminals,” says [a child from Burkina Faso] in the first Tapori “Hidden Talents” letter.

Four Tapori letters filled with suggested activities, games, and discussion topics were sent to the leaders of Tapori groups around the world. The campaign, launched in early July 2019, will end in 2020.

Tapori letters written in connection with a campaign are formidable educational tools that will help children celebrate October 17.

Tapori has developed a process to help children express what having access to their rights means to them. This process will help children speak out and connect with others during the 30th anniversary of the International Convention on the Rights of the Child. 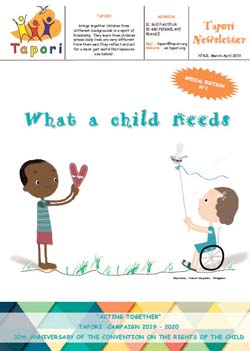 The first Tapori Letter, No. 421 “What a Child Needs,” suggests activities that plunge children into the context of rights by first looking at their needs. The letter contains ideas for talking about the Convention with children, as well as two posters on the rights of the child and what children say about those rights. 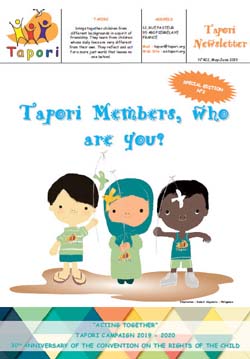 Children were asked to make a small bag to keep throughout the campaign. Like knapsacks full of treasure, they will be filled with the ideas and creations of the children in Tapori groups all over the world.

In the second Tapori Letter, No. 422 “Tapori Members, Who Are You,?” the activities are focused on the child, her roots, her identity, etc. 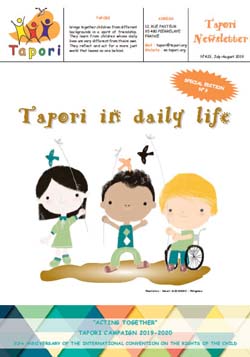 The third Tapori Letter, No. 423 “Tapori in Daily Life” suggests a photo-language activity consisting of asking each child to pick a photo from a group of photos. The primary objective is to use photos to help children pay attention to what goes on around them and encourage them to point out the injustices children experience. Some photos are related to the environment (deforestation, pollution, renewable energies, etc.). The idea is for each child to choose a photo that shows a situation of injustice because it harms children’s futures. 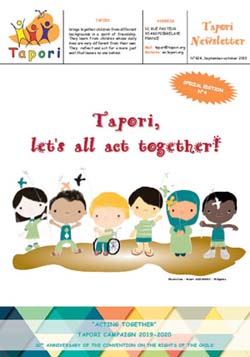 The fourth Tapori Letter, No. 424 “Tapori, Let’s All Act Together,” contains the proposal for October 17 and November 20, the day in 1989 when the United Nations General Assembly adopted the Convention on the Rights of the Child, which entered into force the following year. After reading the story “A Strange Lesson,” the activity of running for mayor encourages children to develop a plan for change. The children will go around their neighbourhood observing and taking notes on problems and their causes, then talk about the changes they want to make and how to make them.