Thirty Years of Standing Up for Human Rights 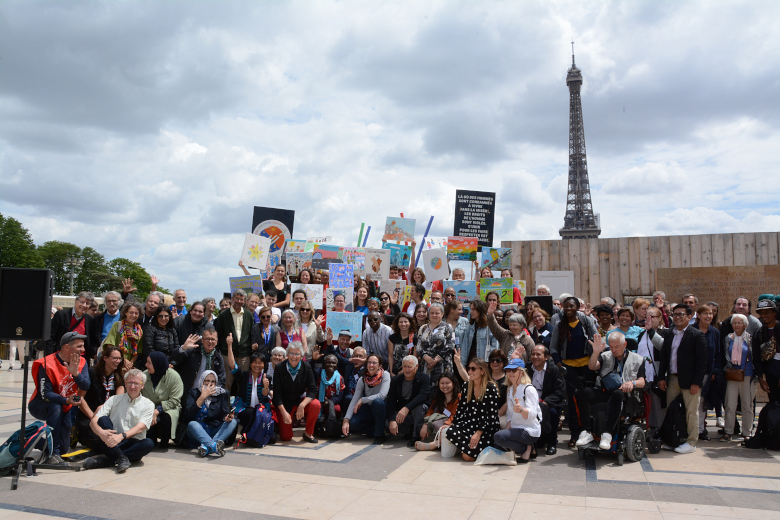 In 1992, the United Nations General Assembly recognized October 17 as the International Day for the Eradication of Poverty. In June, the French Economic, Social and Environmental Council (ESEC) celebrated the day’s 30th anniversary with an event that also looked to challenges and hopes for the next 30 years.

“My father came. He was so proud to hear what they said publicly: that our struggle is about claiming our rights”, said Bernard Monnet. A Fourth World activist, Mr Monnet described the first October 17 event, which took place in Paris in 1987, to a gathering of 150 people at the June ESEC event.

The fact that October 17 is now an official UN International Day is “incredible recognition”, Mr. Monnet stated. “Our parents were trapped in silence”, he explained. “But building on October 17 has allowed us to speak out.” The international day has “…helped us to overcome our personal problems and to see ourselves as citizens of the world and defenders of human rights”.

At a round table discussion on “Resisting Poverty, Building Peace”, Mr Monnet had a question for participants. “What do we do with what [ATD founder] Joseph Wresinski said in 1987? What do we do with his words in the halls of power where the future of humanity is decided?” he asked, referring the words carved on a commemorative stone memorial at the Paris Human Rights Plaza:

What Wresisnki said then, Mr Monnet stated, is “…not just a message, but a plan for today and for the future”. It’s not “…just a question of economic aid, or of having rights respected.” We must, he insisted, “…recognize the knowledge of those in poverty, and trust one another to have a truthful dialogue on the future economy and the society that we are currently building for peace and human rights.”

“We are not poor at everything”

At another round table France Fournier, Canadian ATD activist and member of the Collective for a Quebec Without Poverty, stated,

“We are not poor at everything”, Ms Fournier continued. “This is what October 17 says. We also have strengths.” At October 17 events around the world, people in poverty often speak out about their own experiences. “When we hear someone [in poverty] describe their reality”, Ms Fournier said, “other people going through the same thing can relate to that. It gives breath, oxygen. It awakens forces that we did not know were there.”

ATD Fourth World International President Donald Lee added that the power of October 17 is “seeing the human face of poverty.” Speaking as a former UN economist, he said:

Round table participant Roberto Bissio emphasized that overcoming poverty is a real possibility today. “The world has all the resources it needs”, said Mr Bissio, Executive Director of the Third World Institute and member of the United Nations Development Programme’s Civil Society Advisory Committee. Citing Gandhi, he stated, “’We have more than enough for everyone’s need. But we don’t have enough for everybody’s greed’ or… the greed of a few, which really monopolizes that wealth, our wealth.”

There is a concentration of both wealth and power in certain areas of the world, Mr Bissio said. For example,

When it’s a question of overcoming poverty, there always seems to be a lack of resources. However, Mr Bissio pointed out, during the pandemic billions appeared as if by magic to rescue corporations. Clearly, he concluded, “It’s not that people have to be poor because there is not enough…. There is more than enough to provide a dignified life to every person in the world today.”

Bruno Dabout, Director General of ATD Fourth World International, stated that both economic and social reforms are essential to overcoming poverty. By centering people with a lived experience of poverty, the International Day for the Eradication of Poverty often opens up dialogue among many different groups. On October 17, people who “…have lived in the shame of poverty take pride in their lives, even though they still face many challenges”. And for people “…who are afraid of those living in poverty, who are ashamed of not doing anything or of not knowing how to do it”, this dialogue can help them join the struggle against poverty as well.

In conclusion, Aye Aye Win, President of the International Committee for October 17, said she hoped that event attendees would carry “the spirit of October 17” into their work throughout the year, “…so that human beings can live on a peaceful sustainable planet, so they are free to make their own choices and participate in decisions that affect their lives.”

Following the discussion, participants walked to the nearby Paris Human Rights Plaza where Joseph Wresinski’s words, spoken in 1987, were read in 30 languages. Music, exhibits, games and other activities followed because, as one participant said, “The struggle against poverty takes place in places of power, but also in the streets”.

Event on the Human Rights Plaza:

Photos: June 9, 2022 at the Economic, Social and Environmental Council and the in Human Rights Plaza, both in Paris France.