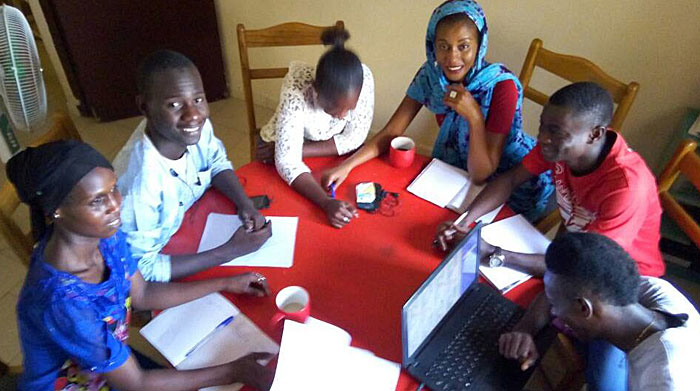 In July’s humid heat of Dakar, a group of young people met on three occasions to reflect on the thinking of “the man who declared war on poverty”, Joseph Wresinski, whose 100th anniversary is celebrated this year.

To begin, they chose Father Joseph’s address to the young delegates who assembled at the International Labour Office in Geneva on the 25 May 1985 under the banner: “All our hands are useful in transforming the world”.

The speech is not from today and yet, they found themselves taken by it. It begins with three questions posed by young people everywhere, and with the answers they give which are like a hymn to life, a call to action:

Who are you? I am a human being.
Where do you live? I live on earth.
What are you doing? I am building the world.

In this Wresinski of another time, with his thinking so relevant in today’s world, the young people feel encouraged by the confidence he has always had in the youth of the world: “Father Joseph knows that young people have the strength and mindset to bring about change.”

“If everybody thought like Father Joseph, imagine what the world would be!”

These young people are not naïve. “When we live in poverty, people think we’re done for. They think we’re thieves and thugs. This shuts a door on our future. But everything is built on solidarity and friendship. If we don’t get along with one another, we will not have the courage to work together. We all have the same aim in life even if we take different paths to get there. If we help one another, the world will be good. “

These young people, investing as cultural leaders in their community, know the importance of sharing knowledge and skills. “If you have strength and you do not help the weak, it is because in reality you have no strength. If you are happy, make your friend happy like you. Father Joseph thought that it wasn’t money but a human heart that helps and lightens the load of others. We young people have heart and strength. By uniting, we can achieve our goal. And those who know learn from those who do not.”

And they find in the thinking of Joseph Wresinski an inspiration for action that leaves no one aside: “Father Joseph encourages us to follow the steps of our grandparents, He encourages us so that we young people do the same for our children. If our ancestors were humiliated, it is up to us to show that we are all human beings. We must combat this humiliation. There is no distinction between human beings.”

Joseph Wresinski’s call, through its universality, responds to the young people’s thirst for a more just world in which everyone is useful: “Father Joseph speaks of one single identity for all young people from all walks of life. There are some who have suffered and others who have a stable life, but he wanted to put everyone together, to unite us for the same struggle. He speaks of people getting together, not of one religion, nor of one ethnic group. He speaks of everyone together. Around the table, we come from different countries; we are citizens of the world. Father Joseph shows us the way to building a world where we are all useful. He talks about sharing fairly. This is a real issue and he has identified the poverty resulting from an unequal sharing “.

Through their reading, the young people have also found encouragement to maintain their commitment as cultural leaders with the children in impoverished neighborhoods. “We prepare our action with the children in advance. ATD Fourth World trains us to think, to programme and to evaluate. This is how we move forward and help things to change. “

“We have to bear in mind that that the future is a blank page to be filled. Nothing is laid down in advance. We have to accomplish our destiny. There is no such thing as luck. Only your commitment, your courage, your faith and your determination can help you achieve your dreams. “

Their conclusion, an act of faith, echoed the last sentence of the text: