Hidden Colours, a Show That Touches the Heart 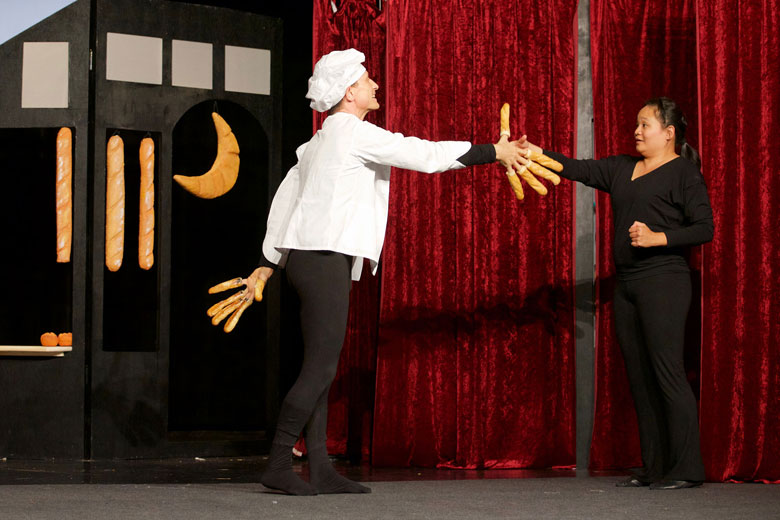 The premiere of the show, Hidden Colours, in Switzerland, performed on 19 September, won the audience’s heart. Each person left “full of powerful images about the quest into lives of poverty. It was a magical show, full of poetry”, says Noldi, one of the many audience members.

This show tells the stoty of a child who – like Joseph Wresinski, founder of ATD Fourth World (1917-1988) – becomes, very early in his life, aware of the injustice of the poverty lived by his family. Alone, he sets out on a journey against preconceived ideas, during which he discovers gestures of solidarity. Through this child’s eyes and feelings, the audience follows in the path of people who are excluded, and their experiences of the pitfalls, the fear, the violence and the poverty, but also the courage, the solidarity, and the good fortune.

The show provoked numerous comments from both audience members and actors

Laurence, an actress, spoke of this unique experience : “If I stay on, if I’m still here, it is because I was surrounded by a great solidarity. It allowed me to learn new things with others, such as how to breath correctly”.

Involved in the same adventure, actors, professionals and amateurs shared an extraordinary human experience : “To me, harmony and humanity go together, hand in hand. I also experienced exclusion. I feel at home in ATD”, confides Michel Tirabosco, composer of the stage music.

Agnès Dumas, an audience member, was very touched by the intensity with which the mime artist, Susan Espejo, managed to portray the insecurity of the little boy, as well as his ceaseless search for the safety that every human being, every community needs. “In Haïti, my country, ATD Fourth World identifies night and day with the insecurity of the poorest. When I came as a volunteer to Switzerland, I said to myself that in a country with so many resources, there is no such insecurity. But in Swiss neighborhoods and villages, I discovered, like at home, the existence of families living in daily insecurity. I saw that the mime artist, Susan Espejo managed to make this reality visible through the little boy whom she portrayed.”

The arrival of Mrs Simonetta Sommaruga, Federal Councillor who spoke with a delegation of members of ATD Fourth World before the performance, added a special significance to this premiere. Eugen Brand, former Director General of ATD Fourth World International, highlighted “the importance of the political struggle led by ATD in Switzerland” to pursue the work about memory and recognition started in 2013, when the Swiss Confederation offered an apology to all the victims of “coercion for the purpose of assistance”.

With these words, Pierre Zanger, from ATD Fourth World Switzerland National Delegation, invites us to continue in the adventure with them!

Performances of the Hidden Colour show in Switzerland will continue until 11 November.

To find out more, visit :