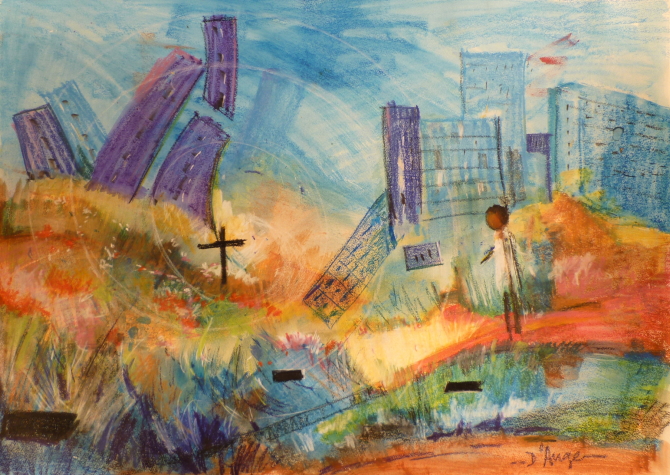 In the midst of the pandemic, Uvira, a city in South Kivu, Democratic Republic of Congo, was recently ravaged by floods. Stefano Tera Roméo, Tapori facilitator, writes:

I am deeply affected in my soul and my whole being. As I write this message, many many families have lost loved ones. Thousands are stricken, homeless. Everything they owned has been swallowed up. May God grant us consolation for these immeasurable losses and help us.

I congratulate our young people and children who have spared no effort to help everyone and to assist the Red Cross relief workers in the Democratic Republic of Congo.

They had the courage to go and rescue their neighbours throughout the night and long after.

There has been support from families who were less affected by the flooding. Without hesitation, they have taken in people who have nowhere to go and no place to safely store the belongings they managed to rescue from the floodwaters.

We call for unity and solidarity so that everyone can contribute what they can to help save lives. The authorities are working on a rescue plan for the people affected by this disaster. Yet, the struggle to recover is likely to be a long one.

Forty-eight hours after that horrible night, 6,000 plots of land lay damaged and 1,500 of those had completely disappeared under the mud. More than 75,000 families are homeless. As shelters were already full, they have no place at all to go. The estimated number of lives lost is 167. We are in mourning.”

Stefano, along with other young people, themselves badly affected by the floods, spared no effort to save lives and help the most afflicted families get back on their feet. Today, with little strength left, they take the time to sit down with Tapori facilitators in Uvira. Through phone calls, they are also in touch with other facilitators in Bukavu, some 150 km away. They take stock of the enormous challenges that the city will have to face:

“We are at risk of starvation”, says Pascal. “The two bridges on the RN5 in the Ruzizi plain that people used to cross to get supplies were washed away.”

Supplies were already difficult to obtain because of bans on travel between the city and the plain to prevent the spread of the coronavirus. Paradoxically, these measures today prevent outside help from arriving.

People are also afraid that there will be a resurgence of the cholera epidemic. The water collection, purification, and treatment plant was destroyed when the Mulongwe river overflowed. Left without drinking water, people are using the water from Lake Tanganyika, which has also swelled and overflowed its banks.

The young people also noticed cracks in the walls of several of the houses that remained standing. Built in the traditional way, with adobe, they are in danger of collapsing due to the continuous rains.

Working together, this group of young people plans to:

They received messages of friendship from their friends in Burundi and from Bujumbura, a neighbouring city a few kilometres away. But neither visits nor assistance are possible since the borders are closed due to the pandemic. Soon afterwards, their friends were in turn affected by the rising waters of the Ruzizi river. The lake also invaded some neighbourhoods of Bujumbura, including Kajaka, where several families of Tapori children and members of the “Haguruka” association live.

“It is through supporting one other that we feel strong”, people often say.

Consolate, Christian, Saleh, Pascal, Stefano, and many other Tapori facilitators stick together and hold firm so that even in the midst of misfortune, hope remains alive.