The ATD Volunteer Corps: A Way to “Anchor a Rebel Spirit” 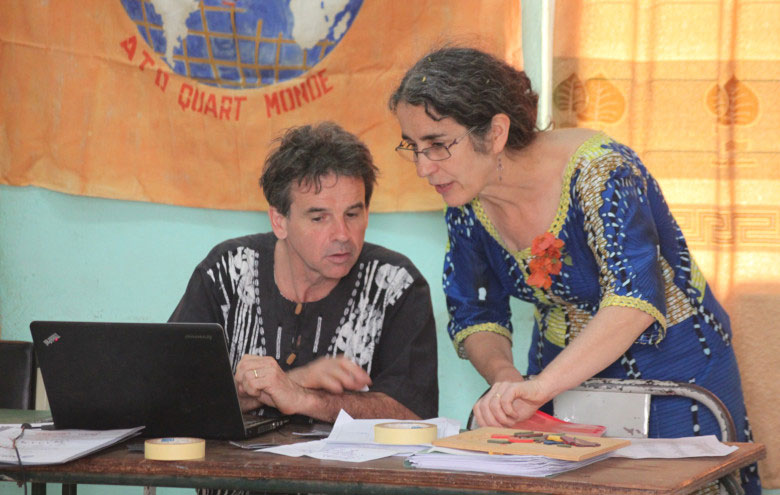 During his thirty years in the ATD Volunteer Corps, Jean Venard has had many opportunities to learn directly from people living in extreme poverty. In this interview, Jean describes how his experience has given him “a more informed, compassionate, and unbiased understanding” of poverty.

What is a Volunteer Corps member?

ATD Fourth World’s goal is the eradication of extreme poverty everywhere in the world. At the heart of ATD are families living in poverty. These families want to escape their own poverty but they also want to help others do the same. Supporting these families are people we call Volunteer Corps members. There are approximately four hundred of them around the world and they come from about forty countries. We also work in approximately forty countries.

Volunteer Corps members are all different ages and have diverse educational backgrounds, life experiences, and beliefs. However, we have in common a commitment to building a world where no one is left behind or, as I like to say, “side-lined”.

We also all have a similar “orientation” — a constant concern for the fate of people in extreme poverty. For example, near where I currently live in the Val d’Oise [France], there was a community project called “the green lung” that began a few years ago.

At first, ATD thought this sounded like a good idea. Then we learned that this “good idea” was hiding an unspoken agenda. In fact, the project involved forcing families of Travellers* to leave the land they had been living on for the last forty years.

To me, this is a perfect example of a project that sounds good but actually ignores the impact it has on the most vulnerable.

A very rewarding way to live

What does it mean for you to have this commitment to people in extreme poverty?

I joined the Volunteer Corps around thirty years ago. I never thought I would stay for this long. For me, the most important thing is to lead what I call “a happy life”. I really think you can be happy if you build your life around and with people in poverty. Some say, “Those people are just losers”. But for me, orienting my life around overcoming poverty is a very rewarding way to live.

In my years as a Volunteer Corps member, I’ve alternated between working directly with people living in extreme poverty and doing other kinds of jobs in the organisation. It works the same way for all ATD Volunteer Corps members. My work has taken me to Burkina Faso, where children live on the street. In Madrid, I spent time with families living in shantytowns. I also worked in Bangui [Central African Republic] with children who live on the outskirts of town.

And for the last two years, I have been working at the ATD International Centre [in France]. With my drill and hammer, I’m trying to keep things looking presentable. I want the place to be worthy of the people who come for training sessions. So between long and short-term assignments, I’ve had a pretty varied life.

“I was outraged about a lot of things”

What do you think you have gained from your dedication to this kind of work?

If I had to summarise it in one sentence, I’d say it has helped me anchor my rebel spirit. Before becoming a Volunteer Corps member, I demonstrated against expansion of the Larzac camp1 even though I had never seen a sheep in my life. And I fought against the High Security Districts in Germany even though I had never set foot in a prison. In fact, I was outraged about a lot of things at the time. But if you want to focus your activism, you can’t just fight against everything at the same time.

To be more specific about what I get out of this work, I’d have to talk about particular situations. For example, there were these two women, Manuela and Asunción, in Madrid. At the time, we were getting ready to attend a meeting organised by a European network fighting poverty. Before the meeting, the organisers had given each participant a disposable camera with some instructions. “Try to illustrate your daily struggle against poverty”, they said.

Manuela and Asunción had done a great presentation on the way they retrieved food from supermarket bins. In twelve photographs, they illustrated their techniques very specifically. Before the conference, they told me how they did this. “When somebody passes”, they explained, “we pretend we’re just throwing a bag away in the bin. Because we have our dignity”.

So we had something all ready to go. But when it came time to present at the conference, they panicked. All of a sudden, they didn’t want to show their pictures anymore. “Surely”, they said, “there will be social workers in the room. Afterwards, they’ll tell the judge and he’ll take our children away. He’ll say our children are eating out of bins”.

This experience made a strong impression on me. It made me understand vividly that extreme poverty keeps people from expressing themselves. Despite their courage, talking about their experiences and their suffering is often impossible for them. They are trapped in silence because even the things they do to struggle against poverty can be turned against them.

But Manuela and Asución also showed me they had a lot of pride. For example, we once had the idea of putting together an exhibit with some of the families we knew. The two of them were very motivated to do this. They kept saying, “People need to know. If they really got to know who we are, they wouldn’t speak to us the way they do.”

When we were looking for a place to put up the exhibit, we had a meeting with their social worker. When we got there, Manuela said something important to her. “Whenever I come in, I can tell you’re afraid I’m bringing you some kind of problem. But this time, I’m coming in with something positive. We’ve put together an exhibit. Can you help us? Would you talk to the city council so we can get a place to put it up?”

You say unbiased, but what sort of bias are you talking about?

Escaping my own prejudice. Being free from the kind of prejudices everybody develops, especially during their education. If you are trained to be a teacher, you think that the first thing you need to do is to educate people. If you trained as a doctor, you think your first job is to heal people.

Because we are well educated, we assume we know what people in poverty need. And we forget that they have things to teach us. So escaping my own biases gives me the freedom to learn from other people.

A profession that takes training

In fact, being a Volunteer Corps member with ATD Fourth World is a real profession in the sense that it takes training. We have to learn how to build a relationship of trust and equality with people whose entire life has been an experience of injustice. And this sort of expertise, building relationships with people who have been crushed by extreme poverty, is what gives my life meaning.

Of course, this kind of expertise can also help you build a relationship with your neighbours, your students, your girlfriend, or the step-brother who’s such a pain in the neck.

You have to be able to see the other person not as someone with endless needs and wants but as someone who has something important to give you.

Activism based on respect

What are some of the key elements of this form of activism that you’ve chosen?

To me, they are a few key things when we’re talking about choosing to devote your life to activism.

First, you have to be sure you work in a way that is responsible. Some people say, “Don’t get too involved”, especially with children. They say you don’t want to take the place of their own mother or father. I like to say that if I’m working with a child I’m also involved with the whole family even if I haven’t actually met them.

Respecting the bond that exists between children and their families is so important. So is the bond between children and the community where they live. The child will still be there long after I’ve gone. So it’s not a question of not getting too involved with people. It’s a question of being involved in a way that is smart and respectful of people from their long-term perspective.

Then it’s about making a commitment to live frugally. To me, living in moderation is so important.

Finally, you really have to be committed to living as part of a community. If we want to work on a worldwide scale in a human community of almost eight billion people, we have to learn to live with one another.

[In ATD] we are part of a community of people who might not otherwise have chosen to be together. But, nevertheless, we agree to depend on one another. To live as part of a community keeps you safe from the temptation to act as a whistle blower or teacher for the rest of the world.

Living in a community that is spread around the world forces us to question some of the usual ways that people do things. For example, the ATD Fourth World Volunteer Corps is not designed for only Europeans to work in southern countries. Someone from Burkina Faso might work in Canada. Or someone from Guatemala could work in Spain.

A supportive community based on sharing

Depending on the country someone comes from, Volunteer Corps members aren’t equal in terms of medical coverage or other government support programs. So we have developed a “solidarity system”.

So our shared commitment to overcoming inequality in the world leads us, as a group, to also find ways to overcome inequality amongst ourselves.

Living as part of a larger community has also led us to think about what kind of governance we want among ourselves. Our priority is a “horizontal” way of working, and without any ideological bias. We are always guided by what we hear from people who are usually not heard. And this forces us to imagine different forms of decision making, even within our international leadership team.

*Travellers are “a community of people who are commonly called Travellers and who are identified (both by themselves and others) as people with a shared history, culture, and traditions including, historically, a nomadic way of life” according to the Pavee Point Traveller and Roma Centre.

Click the video below to see an interview with Jean:

This article was originally published in French on the website of ATD France.