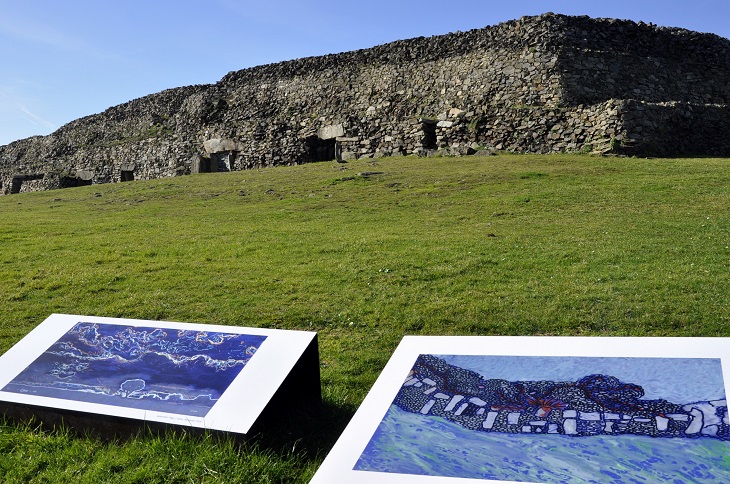 “From one river bank to the other, they built a bridge a long time ago.
Everyone can use it, moving forward into the future, sometimes looking back at the past.
They meet, those on one side and those on the other, to make the bridge stronger.
So, for a long, very long, time, we will cross the bridge.”

With these poetic words, Catherine described her first encounter with the Cairn. She was staying in a youth hostel in Morlaix (France) following the exhibition’s opening.

From the time it began in the 1950’s, ATD Fourth World has conducted activities that are grounded in the belief that a society changes through its culture. A society becomes more humane, it seems, when all its members can contribute in some way. The People’s University, Festivals of Learning, Street Libraries, theatre workshops, singing, and painting are all ways ATD Fourth World puts this idea into practice.

In 2012, ATD Fourth World created the “Art Researchers” group in France and other European countries to share ideas and projects. Then in 2016, ATD Fourth World France signed an agreement with the National Monument Centre. Its provisions allow people from all social backgrounds access to the hundred or so sites that the Centre manages.

In early 2018 a group called “We Paint Together”, initiated by ATD Fourth World in Landerneau, France, began creative work that led to an exhibition outside the Cairn, facing the sea. Artists from Brest, Rennes, Brussels and the “Art and Sharing” group in Paris submitted their work. The opening took place 16 January with 30 guest artists invited. The exhibition itself was open to the public through 12 June 2019.

The Cairn is an incredible mausoleum nearly 7000 years old, the largest and oldest in Europe. Its pyramid shaped construction, in elongated degrees, was built 2000 years before the first known pyramids in Egypt.

The Grand Cairn of Barnenez is an incomparable treasure of the European Neolithic period. As it was discovered only in the middle of the 20th century, few people know that the Cairn exists. In order to increase awareness of the Cairn among the general public, the French National Monuments Centre interviewed artists and sought their imaginative skills in order to build a collection of visual images. The Centre wanted to ensure that this collective memorial included a broad range of perspectives and interpretations. So they offered ATD Fourth World artists-activists the opportunity to participate in the exhibit.

The ATD Fourth World activist-artists involved in this project had a variety of sensitive and colourful responses to the Cairn. Here is how one group described the creative process that led to the image below:

“We cut a photograph in twelve rectangles. At random, everyone created a larger rectangle, according to their own creative inspiration. The puzzle has been put together. A large modern bouquet has appeared. Each small painting is a piece of our hearts that we offer as one collective work of art to our ancestors. Because the Cairn is not only a museum, it is the cradle of our humanity.”

Approximately 10,000 visitors to the Grand Cairn have spent time viewing the art exhibition. Painting, either individually or as part of a group, is a powerful experience. Expressing one’s self in this way, and being part of a major project such as this one, can also be a source of great pride. This effort has been a success for everyone involved.

Life has been rough on one of the activists-artists involved in the French project. He did not have the confidence to sign his art or assign a copyright for his work at the National Monuments Centre.

Note: The entire exhibition on aluminium panels will be given to ATD Fourth World France at the end of June 2019. Original works remain the property of the artists. The group work will be entrusted to the ATD Fourth World art library.

* The Barnenez Cairn is one of the oldest standing structures in the world.

Pictures of the Cairn and the outdoor art exhibit can be found here.