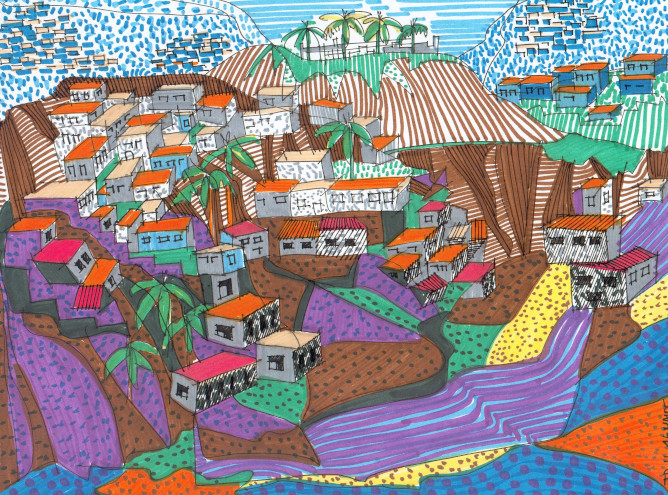 For several years, Haiti has been experiencing a series of political, economic, social, and environmental crises. The ATD Fourth World team works in the southern part of the capital city of Port-au-Prince. Last October, they sent news of a harrowing summer.

Our door is still open in Haiti

On June 4, early in the morning, bullets hit the ATD Fourth World House in Haiti. We live in a Port-au-Prince neighborhood called Martissant where ATD Fourth World has worked for 35 years. Here there has been tremendous violence as gangs fight for control of certain areas. Since June, the situation has been the same in other parts of the capital and around the country.

That June morning, we decided not to open our preschool because we knew more bullets could come at any moment. Then, around late morning, an immense river of people began rushing past the Fourth World House in a panic. This went on for several hours. The men, women, and children—some barefoot, some barely clothed—seemed not to know where they were going. It looked like they had just dashed out of their houses, leaving everything behind.

Our team quickly decided to leave the front door of the Fourth World House open so anyone could take refuge inside and catch their breath. Some families did come in, exhausted and terrified. One mother had lost track of her husband and children in all the panic.

An older woman hadn’t been able to keep up with her grand children. She was exhausted and so distressed that she couldn’t eat or drink anything. She only wanted to lie down and sleep a little.

We tried to be welcoming, offering something to eat or drink, talking with people and playing with the children. All we could do was attempt to help everyone get past some of their terror. Then people moved on to seek shelter with friends or relatives.

Thousands fled their homes on June 4 and in the days that followed. Two months later, it’s still impossible for them to return home. Many people’s houses have been looted or burned. Most have gone to stay with friends. Thousands are living in a sports center turned into a temporary shelter. Others are simply camped out at the edge of the local fish market.

For two months, the shooting has continued. All this time people have been gambling their lives on the Martissant road. Linking southern and northern Haiti, this road goes between our neighborhood and the center of Port-au-Prince. Many people use it every day, risking death to earn a living in the city and provide for their children. Since early June, unknown numbers of people have been killed on this road or in the surrounding areas. Will anyone ever tell their stories?

With all the fighting, many have left our neighborhood. Each time we’ve visited places where displaced people have been staying, we found people we knew. In spite of the violence and danger, many who have stayed in the area keep coming to the Fourth World House. There, people can gather safely to talk, sustaining each other through their fear and uncertainty. As usual in times of conflict, people feel protected and at ease here.

Risking death to feed a family

ATD’s nutrition program is another reason people come to the Fourth World house. Currently, the program serves 57 children. At the beginning of June, not many families came, but as time went by a few people began to come back. Now, depending on the week, we manage to provide milk to between a third and half of the children enrolled. However, to get to the Fourth World house, parents have to cross a dangerous neighborhood. One young mother and her sister have risked their lives many times just so children in their neighborhood can have milk to drink.

Several lulls in the fighting over the last few weeks allowed us to see children we haven’t seen in a long time. And to our great joy and surprise, two who were malnourished have rebounded to a healthy weight.

Yet people here are concerned because the Doctors Without Borders emergency center in Martissant has closed permanently. The center, which served many people, was also attacked in June. “If we give up,” someone asked, “how will our children be able to move forward?”

Strength in the face of devastation

Even in the midst of all the violence and turmoil, we see people showing tremendous bravery and determination.

For example, one mother has five children, the youngest in preschool. Her husband has passed away. A few days ago, the family’s house burned down in the armed conflict that never seems to end. The family lost everything. This mother sent her children to her aunt’s house for safety, then came to the Fourth World House. She refuses to give up and wait for help. She said she is looking for work in order to rent a new place to live. In September, she wants her children to have a home again. And they must have uniforms and school materials, she insists, so they can go back to school.

Another woman has not had running water for several weeks. For months now, she’s been staying with neighbors. Her husband has left for another province to get medical care. They have no clean drinking water, and can’t wash the children or their clothes. In addition, a local gang cut off the power supply so there is no electricity either. And yet she comes to the Fourth World house every week to get milk for her daughter who has a disability. Each time she risks her life for this box of milk.

Yet another mother is living in the sports center with her children. On the floor in a huge hall, they have only a tiny space crowded amidst everyone else living there. She dreams of renting a home in the countryside where the children will have some stability. At the center, they used to distribute two meals a day and even these were not easy for people living there to get. Now they give only one meal in the morning to the children. This mother wants to be able to cook to feed her children properly. Despite the danger, she plans to go back to selling small items in the street so she can afford to buy a small cooking stove.

We have also seen people making heroic efforts to help each other. Relatives have been housing their extended family members. For the past two months, a pastor has been hosting and feeding more than 20 people in his home. And there are so many other compassionate acts of solidarity.

Yet the situation continues to crush people’s lives. Some are separated, unable to get news from family members or friends. Everyone is concerned about their children’s future.

The political situation in the country remains uncertain. Other neighborhoods in the capital and in the countryside are suffering just as much as Martissant. In addition, travel to many places continues to be risky. An ATD ally was shot while traveling to work. Two ATD Volunteer Corps members living in the rural northwest have not experienced violence. Still it is risky for them to go to Port-au-Prince through an area controlled by gangs. There, even public buses are attacked. In a town bordering the once peaceful capital, a friend of ATD is increasingly worried as one gang keeps going deeper into his neighborhood.

On August 14, on top of the violence and chaos, an earthquake shook country, followed three days later by Hurricane Grace. The country was, as one journalist put it, “in the depths of despair.” The hardest hit area in the south of the country is where most of the families in poverty ATD knows are from. Many had taken refuge there to escape the violence in the capital or sent their children back there for safety. Some mourn the dead or missing persons and many have told us that their homes were destroyed.

These devastating summer events only increased the ATD teams’ solidarity, reinforcing our concern for each other and everyone we know. We realize more deeply that we are responsible for one another. And we’ve become even more aware of how important the relationships we’ve built over time are. If we’ve managed to stay in this area it is because of all the relationships ATD has developed since beginning work in Haiti many years ago.

In the midst of all this volatile uncertainty, we are planning to restart our activities, especially the celebration of World Day for Overcoming Poverty on October 17.* And we have started to visit other neighborhoods again, although with great caution. The schools reopened yesterday. When children walk in the streets, it is always a sign of hope.

On October 17 and every day of the year, we hope that no one will be left on their own to face unbearable poverty or violence. And we hope that people around the world will, like our Haitian friends, keep building supportive relationships that can sustain them through suffering and hardship.

*This article was first published in early October, 2021.