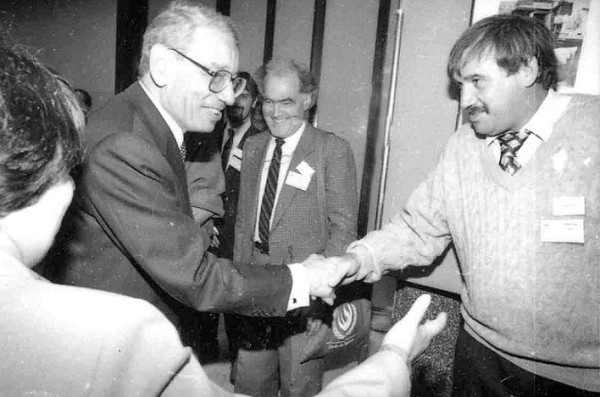 ATD Fourth World pays its respects to Mr. Boutros Boutros-Ghali, a former UN Secretary-General, who died on 16 Feb. 2016. He was a man who “incarnated the words inscribed in the preamble of the Charter of the UN, ‘We the Peoples of the United Nations,’” remembers Eugen Brand, former Director General of ATD Fourth World. “Boutros-Ghali tried to construct a house of all peoples, and of every person, determined that people in great poverty be recognized as indispensable partners for the world to progress — although he realised that this step would require a profound transformation of the functioning of the United Nations and its structures.”

Following regular meetings with ATD Fourth World that were instituted with the previous UN Secretary-General, Mr. Javier Pérez de Cuellar, ATD’s first meeting with Boutros-Ghali took place in October 1994 on the occasion of the World Day for Overcoming Poverty.

This event took place at UN headquarters in New York around a quilt called the “Patchwork of Our Lives.” This artwork replicated, in the official languages of the UN, the call to action engraved on the Commemorative Stone in honor of the victims of extreme poverty. It was the closing event of the 2nd International ATD Fourth World Congress, taking place during the tenth anniversary of the International Year of the Family. The UN Secretary-General came to meet participants of the congress and received their request that a replica of the Commemorative Stone be placed at the United Nations. This request was fulfilled on 17 October 1996, when a replica was unveiled in the UN gardens in New York. Since then, hundreds of children, young people and adults have gathered at this stone to mark the World Day each year.

In 1996, at the UN Palace of Nations in Geneva, Boutros-Ghali welcomed international delegates of ATD Fourth World, both adults and children representing Tapori, in the presence of the mayor of Geneva. “We met in the Disarmament Room,” remembers Brand, “Boutros Boutros-Ghali arrived and took his seat. Delegates approached the microphone and spoke. We saw that Boutros-Ghali turned over the paper with his speech in order to take notes on the back about what the adults and children were saying. Our presentations took a long time! The UN staff started to become impatient. But Boutros-Ghali was listening with enormous attention, he asked questions and began a dialogue. Afterwards the protocol officer, who had had some harsh words for us because we were throwing off the schedule, came back to apologize. She had come to understand the importance of this meeting between families in poverty and the Secretary-General of the United Nations.”

A different kind of meeting between Bourtos-Ghali and ATD Fourth World had taken place the previous year, for the preparations of the World Summit on Social Development that took place in Copenhagen in 1995. On that occasion, Eugen Brand and Alwine De Vos van Steenwijk, president of ATD, told Boutros-Ghali about a speech made in 1988 by Joseph Wresinski to a French national conference on unemployment.

The World Summit focused on employment, poverty, and solidarity in the face of damage done by globalization. Boutros-Ghali appreciated Wresinski’s proposals that young people and adults in poverty no longer be made to feel useless, and that all people should have a lifelong right to training and education. From then on, Boutros-Ghali supported ATD’s participation in the summit, which included writing a report entitled, “To Fight Poverty and Exclusion, Rethinking Human Activity.” The Copenhagen Summit led to the recognition of the multidimensional aspects of poverty and extreme poverty, which opened the pathway towards the Millennium Goals, and then the Sustainable Development Goals.

Brand says, “Boutros-Ghali wasn’t the kind of man who wanted to spend all his time with cabinets or embassies to defend the interests of the States. He was a free man who preferred to be in direct contact with people. With him, we developed mutual trust; he always offered us his support.” This link continued when Boutros-Ghali later became Secretary-General of La Francophonie, (an organisation linking all French-speaking nations). He continued to counsel ATD, and supported its 2007 campaign “Overcoming Poverty, A Path to Peace.” When he first heard the name of the campaign, he said that he questioned himself about the challenge it presented: to obtain recognition that extreme poverty is violence experienced by people living in deep poverty; and that people in poverty, despite everything, try to build peace. “In great sincerity he told us that he had never before thought of this link between extreme poverty and peace”.

In 2008, Boutros Boutros-Ghali accepted without hesitation to become a member of the International Committee of the World Day for Overcoming Poverty, a responsibility he continued to assume until his death.