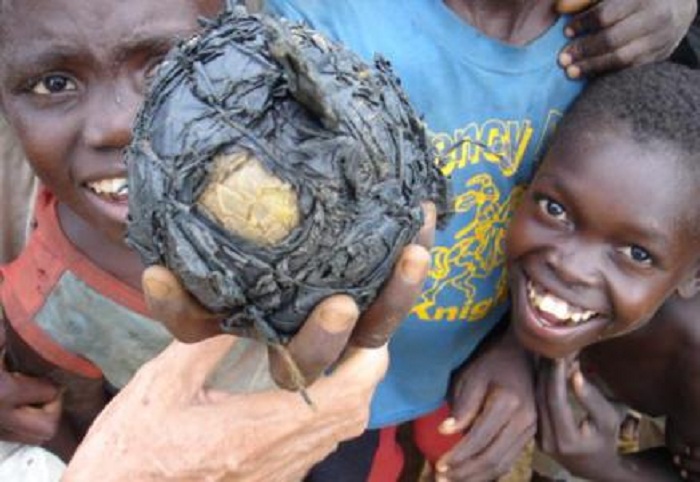 In the Democratic Republic of the Congo, as in so many other parts of the world, children have figured out how to make their own soccer balls, like this one made of paper, plastic and string. (Source: http://otracosa.skynetblogs.be/archive/2006/11/index.html) “School hates me.” Just a few hours earlier, this child in New Orleans had been so excited about her first day of kindergarten. But one short school day had already made her feel stupid. People living in poverty are made to feel stupid over and over: “He’ll be a failure like his dad, he shouldn’t even be in this class.” “What makes you think you’ll be able to raise a child?” “You shouldn’t be here, you’re in the way, you’re slowing things down.”

Two studies, one done at Princeton, Harvard, and the University of Warwick, and another cited in the Proceedings of the National Academy of Sciences, argue:

“New research found that poverty imposes a kind of tax on the brain. It sucks up so much mental bandwidth – capacity spent wrestling with financial trade-offs, scarce resources, the gap between bills and income – that the poor have fewer cognitive resources left over to succeed at parenting, education, or work. Experiencing poverty is like knocking 13 points off your IQ as you try to navigate everything else. […] That finding offered a glimpse of what poverty does to a person during a moment in time. […] But scientists also suspect that poverty’s disadvantages – and these moments – accumulate across time. Live in poverty for years, or even generations, and its effects grow more insidious. Live in poverty as a child, and it affects you as an adult, too.”

It is useful to understand more fully just how devastating the challenges of poverty are and how they destroy people’s chances to succeed. However, the framing of this research as linked to “impaired brain function” and lost IQ points is frighteningly reminiscent of The Bell Curve, the 1994 book by Charles Murray and Richard Herrnstein that linked low African-American test scores to inherited racial differences in intelligence. While other researchers quickly made significant challenges to the premises and assumptions underlying The Bell Curve, the book continued to be widely cited for many years. Its argument fed not only racist stereotypes, but a fragmented understanding of just what intelligence is.

In fact, lead researcher of one of the new studies, Harvard’s Prof. Sendhil Mullainathan, frames his research with much more nuance: “That’s not to say that poor people are less intelligent than others. What we show is that the same person experiencing poverty suffers a cognitive deficit, as opposed to when they’re not experiencing poverty.” Unfortunately, many articles featuring this quote from Mullainathan spread the opposite message, for instance in the very headline of MSN’s “Money worries can make you less intelligent.”

IQ tests, like SATs and so many other standardized tests, do of course measure certain aspects of mental ability, particularly the kind of intelligence that those who design tests are the most familiar with—but these tests completely ignore other aspects of intelligence.

While the stress and chaos of poverty does indeed consume people’s mental energy, ATD Fourth World’s experience teaches us that it also sharpens their intelligence in certain ways. People in poverty regularly invent approaches to cope with challenges that would completely stump others.

For instance, on a visit to the Philippines last month, I visited a community that lives under a bridge in Manila. About 500 people live there, not only on the riverbanks, but occupying every inch of space on the underside of the bridge from one side of the river to the other. This means about 100 different dwellings, some that even have generators and computers. Most homes are minuscule, and they were built at all different times as extended families have grown. On our website, they say, “We have to be very creative and resourceful in building our rooms. Without a degree, somehow we are architects. We know how to organize our little belongings in such a tiny place.” It’s true that they are architects. Although everyone deserves more secure forms of housing, there is a staggering feat of engineering behind these homes. I saw the same intelligence at work in Madagascar where families who used to lack formal housing lived in makeshift shanties at a garbage dump. While their homes were regularly destroyed by the authorities, these families regularly found ways, usually with nothing more than a little plastic sheeting, cardboard and string, to rebuild them. In society today, the more educated people are, the less they are obliged to design everything they need to live. In poverty, however, children begin life by finding ways to invent games from scraps of string and plastic. Another community in the Philippines lives on an industrial waterfront where shipping containers are stacked to the height of 20-floor buildings. Large trucks come and go, spattering mud or dust, and there’s currently a mountain of coal dust blowing soot around. Some of the families there live in an alleyway where there is so little natural light that it seems like dusk even at high noon. Others are in a makeshift tenement house, partitioned without windows. Many people, suddenly forced to live without daylight, would completely lack the mental strength and resilience to cope with such unnatural conditions. But in fact a group of adults in this community not only find ways to cope with the challenges of daily life, but contributed to designing and carrying out two of our participatory research projects in recent years: one on the violence of poverty and the search for peace, and the other on the impact of the Millennium Development Goals.

People living in poverty are smart in ways that the world ignores. It’s true and unfair that their experience does not teach them the skills needed for an IQ test, nor for many classes or jobs. We sorely need to redesign education in ways that can unleash the hidden potential of all children. But at the same time, people in poverty are continually learning and applying their knowledge in order to cope with life in close quarters with scant resources. On a planet that is strained to the breaking point by over-consumption of natural resources, we need to learn from their resourcefulness and creativity how everyone can live with less. People in poverty have no choice but to cope with being bullied, discriminated against and stigmatized. In a world where diversity and migration too often lead to conflict, we need to learn from their emotional intelligence how people can learn cooperation, develop mutual understanding, and progress toward peace together.

The world is missing the intelligence of people in poverty. With the global challenges we face, we need every mind. We can’t afford to let a single child feel that school hates them.