Between Belgium and Haiti: “My human warmth” | Isabelle Pypaert Perrin 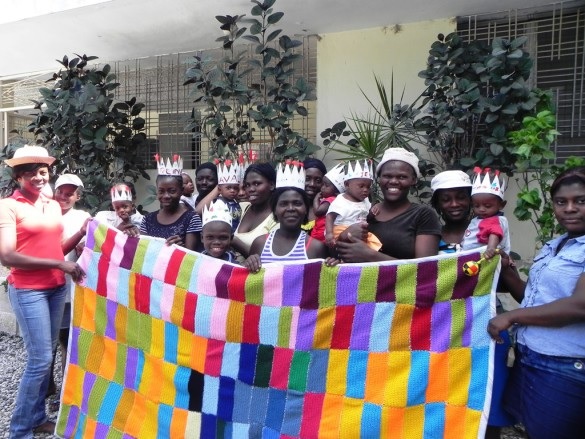 Carine grew up in extreme poverty in Belgium. A mother of three children, she was absent from her children’s lives for several years when they were growing up. Now together with her children again, she is determined to re-establish the family bonds that poverty had destroyed. And she went further: she also created new bonds that went beyond borders.

Using only her hands and her creativity, Carine has been cutting, slicing, trimming, pasting, and cutting again — bits of a picture, fragments of cloth, and strands of thread. This was Carine’s way of trying to express to her children a part of the story they all share. By recreating her past with them, she hopes to reunite her family. Her photos and all her keepsakes of the time they spent together are gone, misplaced during moves or destroyed by flooding. For several months, she cut pictures out of magazines, shaped pieces of fabric, and glued them into a notebook. Page after page, she painstakingly resurrected the moments she spent with her children to show that she was there, that she was a mother. In her book, “What We Did Together” (as she entitles it), she depicted painting, reading books, embroidery workshops, a visit to a museum, and the time they brought home their first computer. But the actual photos — the irrefutable proof of the time they spent together as a family — were still missing.

One day, Carine showed her book to Françoise, an ATD Fourth World volunteer. When Françoise went to the ATD archives, she found photos of Carine’s family over the years. Page after page, just like a patchwork, the bits and pieces of the lives of Carine and her children were finally glued back together.

A few weeks later, Françoise visited Carine with an ATD volunteer from Haiti. He told them about the 2010 earthquake there. He spoke about how courageous all the mothers were, how they all wanted to come together to take care of their babies, as they had done before the earthquake, in the ATD Babies Welcome program.

When Carine heard about this — all the lives and homes destroyed, all the memories obliterated by the earthquake — she decided to start on a second patchwork, this one made of yarn. For weeks, with the same determination and the same affection as for her family’s notebook, she crocheted squares of all different colors. Then she sewed them together to make a large blanket that parents in Haiti could sit on with their babies. She feels a strong connection with these families on the other side of the world. To accompany the gift she wrote, “This quilt is not much, but it comes from my heart. It’s my human warmth. I can spend my time doing something useful to comfort others.”

Family mementos glued into a decorated notebook to give children memories of time spent together; crocheted squares sewn together for children on the other side of the world — these are just a few of the silent and priceless gestures linking memories of so many men and women. Often ignored or misunderstood, these gestures nonetheless remind us how strongly people in poverty aspire to contribute to a better future for everyone, using their hands, their minds, and their hearts.