A Legacy of Resistance 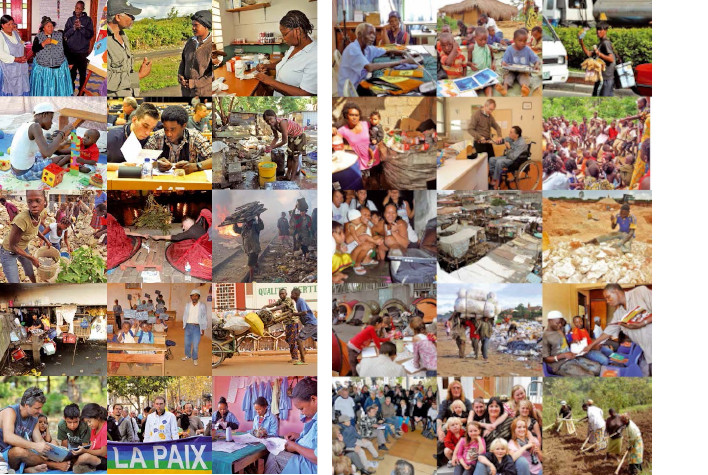 “Being part of something that liberates other people is important to me. I have only one struggle: I am unwilling to accept extreme poverty.”

From his parents Pape Mody inherited a deep compassion for others along with a will to resist being cast aside. From the time he was very young, Pape’s parents ingrained in him sensitivity, courage, and the importance of looking out for everyone around them. Every day, they gave him lessons in life: don’t give up, earn a living to support your children, and never abandon anyone around you who is suffering.

As a child, Pape Mody took part in an ATD Street Library in Dakar. Through the Street Library, his parents also got involved with ATD. There, they discovered that they were not alone in standing up to misfortune and hardship. In fact, they learned, many other people like them around the world were doing the same—refusing to see anyone be crushed and humiliated by either suffering or disdain.

Joseph Wresinski, who founded ATD Fourth World in France in the late 1950’s, insisted emphatically on this little recognized characteristic of poverty. In places where life is very hard, there is a sense of unity. People help each other out all the time. And they stand up for each other too.

Wresinski himself grew up in hardship. He knew first hand about this aspect of poverty from his parents and his environment. When asked by a journalist in 1987 what ATD had achieved in 30 years, he replied,

Pape Mody is not alone. Today, other young people work with ATD Fourth World and support those around them by building on this heritage. Within themselves, these young people have access to a valuable source of knowledge that they can always tap into. It helps them see clearly what is happening around them. In addition, it helps them to stay motivated and focused on prioritising those in poverty. And it helps them decide what activities they want to undertake.

Informed by this history, we can read the ATD/Oxford University research on “The Hidden Dimensions of Poverty” not only to have a better understanding of poverty, but to develop strategies to put an end to its persistence.

Today, we can see in parents living in poverty a power to act that our actions can build on. This power to act will then become a legacy for their children and future generations.

Related articles:
Overcoming Poverty through Intergenerational Connections in the United States
Women in Guatemala organize their community to help neighbours during Covid
In the Central African Republic, one couple struggles on, helping others, after losing everything.
In Bolivia, one woman risks Covid to help those in her community who are “invisible” to government assistance programs.
A group of ATD young people step up to help refugees flooding into their city in the Democratic Republic of Congo.
On a poverty-stricken hillside outside Lima, Peru, one woman goes out of her way to help her neighbours during the pandemic.