The ATD Fourth World team in Poland is based in Warsaw and has groups of friends and supporters in Kelce, Strzelce Opolskie, Gorzno, and elsewhere around the country.

The team creates opportunities for encounters between people of different socioeconomic backgrounds.  The goal of these encounters is to help include the ideas of people in poverty so that the country’s political and economic transition leaves none of its citizens excluded, and enriches the lives of those living in extreme poverty.

To accomplish this, the team runs:

ATD Fourth World–Poland is a member of the Polish branch of the European Anti-Poverty Network and of the Council of Polish Youth (PROM).  In Warsaw, our team participates in consultations related to collaboration between the Ministry of Labor and Social Programs and civil society organizations for 2015 to 2017.

ATD Fourth World has been legally registered in Poland since 2005.

On July 12-14, ATD Poland hosted the Summer Seminar for Equal Opportunities in Nowe Kotlice. Surrounded by forests and fields, (…) END_OF_DOCUMENT_TOKEN_TO_BE_REPLACED 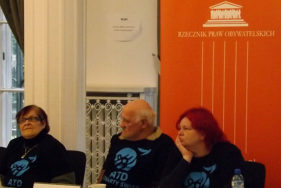 Above: Meeting with Ombudsman of Civil Rights. Our Voices Project In June 2017, the Our Voices project, financed by the (…) END_OF_DOCUMENT_TOKEN_TO_BE_REPLACED